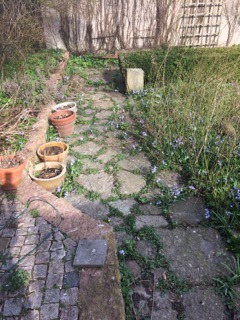 This country town garden had two existing Öland stone paths in need of refreshing with a further two new ones to be added using reclaimed stone sourced through Blocket. The existing stones were carefully removed and laid out in the same pattern elsewhere as they are notoriously difficult to place together from scratch.

The old sand was dug-out to remove weeds and ant nests.  A weed proof membrane was added and a thick layer of stenmjöl placed on this to support the stones. A concrete footing was laid in a shallow trench on the garden side of the path to support the edging stones. Granite sets were used for edging and cemented in position to help prevent plant roots from invading the path and to hold the stones in position more strongly.

It was more difficult to lay the two new paths but these were achieved with a little patience, time and cups of tea.

Öland stone is a traditional material for paths in Skåne but appears to have fallen from favour.  It comes in many thicknesses and in at least two colours of pink and grey, to my knowledge. The pink is my favourite for the warmth it provides but both have a knobbly, non-slip texture, often with fossils, that makes them perfect for formal and informal gardens.  It’s nice to see it being considered again even if it does mean extra work to lay. Creation of a perennial border »

This site uses Akismet to reduce spam. Learn how your comment data is processed.