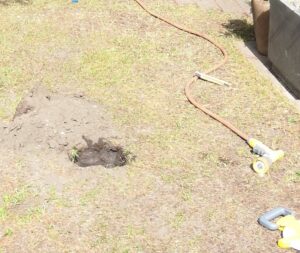 One of my customers had a problem with the roots of several conifers blocking one of the underground pipes taking water from his roof.  This resulted in local flooding around the drain which, he worried could affect his cellar.  Several companies came to look at the drain but none were willing to try to unblock it.

I had seen examples of rainwater gardens in permaculture articles and seen some examples in Britain (1).  I suggested this as a solution to the problem, if the local conditions supported it. To have a rainwater garden, the soil must first be able to absorb water fast enough to avoid flooding.  Clay soils tend to prevent good drainage but the light clay and sand around Malmö made me confident it would not be a problem.  There must also obviously be a fall so water can flow away from the house and not back towards it.  On testing, the soil absorbed water at a very fast rate and a gradual fall was identified away from the house towards the area where the garden would be.  This was over five meters from the buildings.

A rainwater garden is basically a leaky pond that holds water for a short period, giving it time to soak into the ground after rain. An overflow was constructed using a large, almost horizontal, perforated pipe placed in a ditch with gravel and a membrane to protect from roots.  This made a zigzag down a slope to hold occasional overflow from the pond after periods of prolonged or extra heavy rain, such as during thunderstorms. 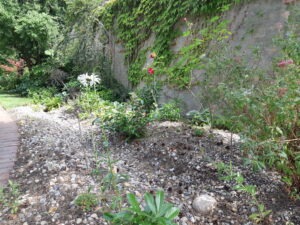 Swale with ferns and other moist shade loving plants 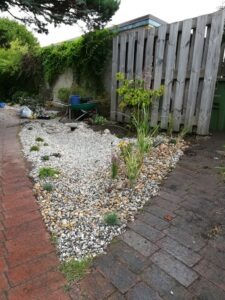 The bottom of the rainwater garden absorbs the most and also has organic material dug deeply into it making it ideal for moisture loving plants such as Hosta, Rogersia, arum lilies and ferns.  Stone is used to line the edges and so alpines and succulents are used at the top where the drainage is best and dry conditions occur.  The area between is suitable for most garden perennials that like a free-draining but moist soil such as Echinacea, Foxgloves, Rudbeckia and grasses. The garden was straightforward to build, plant and maintain.  Initially, it looked very bare and sad because of the stone but as the plants have spread to fill the garden, this has softened it, to the relief of the customer.

This site uses Akismet to reduce spam. Learn how your comment data is processed.